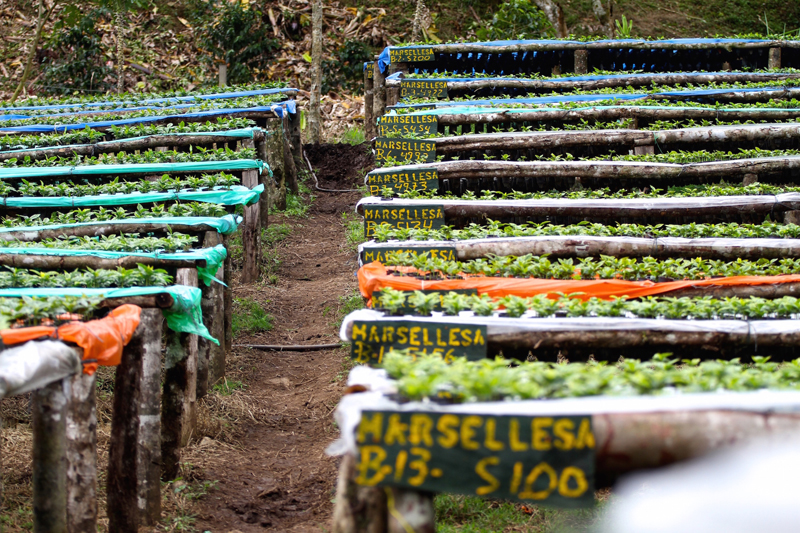 This sister farm is a secondary farm purchased by the family to increase output. It is at a much higher altitude and is extremely hilly, as we soon found out when we walked around it in 30 degree heat!

One of the main focuses of this farm is it’s extensive coffee bushel nursery, with row upon row of seedlings - a total of 7,500.  A coffee bean is planted in fertile soil which the worm farm produces and this germinates after two to three months. The little bean shoot eventually falls off to produce a leaf.  More leaves are produced and after about 7 months they are ready for planting.

These particular seedlings which we saw today (the ones in the photo) were planted in January and will be ready for planting in September. We saw six months after they had first been planted, and they currently have between two and four leaves. Meanwhile, in another part of the farm, land is being cleared ready for planting which we saw on our travels.

Amongst these seedlings, we also saw the more established shade plants.  A shade plant is planted at intervals of four meters between each coffee bushel to protect them from sunlight, as the coffee bushels require five hours a sunlight per day for optimum growth.

After another beautiful lunch on the veranda of the house, sunny one minute and torrential rain the next, we began our four wheel driving expedition back down the mountain, once again passing through many streams, waterfalls, and other coffee farms along the way.