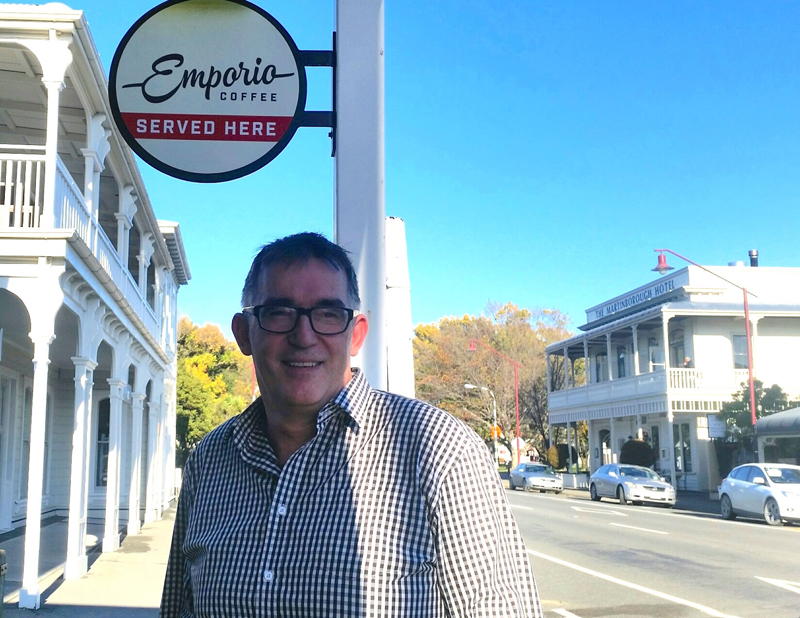 The Martinborough Village Café, under a former owner and as part of the Martinborough Wine Centre, opened in 2000, around the same time as Miriam and Eric Heycoop established Emporio Coffee. It was Emporio’s first café client! Seventeen years later and with new owners Bruce Laurence and Chris Peterson, Emporio Coffee is proudly still ‘served here’. On a crisp Autumn day, I hooned over the hill and sat down with Bruce for a lively chat...

RH: Bruce, you moved to Martinborough from Melbourne where you had studied architecture. How did you get into hospitality (let alone the Wairarapa)?

BL: In the 1980s, Chris and I left New Zealand on our OE and stopped off in Melbourne on the way. We didn’t make it any further. I completed an architecture degree there at RMIT then worked for some Melbourne architects. But we also bought a café, which Chris ran with a business partner.

I just seemed to get more and more involved with the business to the point where I resigned my day job, which I realised I wasn’t much enjoying anyway.  We worked seven days a week at the cafe, it was open 6am until 6pm. The slowest days were equivalent to our busiest here in Martinborough.

Oh yes. That was a challenge. We bought a restaurant in Exhibition Street, so for a while we had both businesses. We sold the cafe, but the timing wasn’t great. It coincided with the Victorian government changing the tax laws that meant our core clientele, corporates, no longer found business lunches and dinners so affordable!

So after a few more years you went bush?

We needed a complete change so moved for a year to the old gold mining town of Walhalla. It’s a stunning village in a stunning valley—four hours from Melbourne. In its hey-day Walhalla was one of Australia’s wealthiest towns and had 4000 goldminers there.

When we lived there, the population was 22; we were known as #23 and #24! Christopher and I worked in the town’s 12-bedroom hotel, which was full every weekend.

A move to rural land near Martinborough wasn’t so much of a shock then?

Exactly. We came home for a holiday and I visited Martinborough, and the wine centre café, for the first time. On returning to Melbourne, Chris’ brother sent word that the business was for sale. I remember we arrived back in New Zealand on 13 January and took over on 1 February. Nobody told us that was the Martinborough Fair Day! We’re still here fourteen years later.

We love that after all those years, we are still the coffee supplier of choice….

Not only does Emporio produce consistently great coffee, you can’t beat the hands-on service. A twice weekly delivery and servicing within four hours means that, despite being approached countless times by other coffee companies, we remain loyal to Emporio. Even other cafes in Martinborough come to us for back-up coffee when their own suppliers can’t keep up.

Tell me more about coffee, what makes a great experience for you?

There are so many factors to what makes a good coffee, I think there are ten parameters. From the bean itself to the roasting, to the grind, to the barista. You only have to get one thing wrong long the way. We are particularly careful here about flushing out the machine first thing and adjusting the grind then too, as well as later in the morning.

And your own daily habit?

When I was working in Melbourne I had twenty cups a day!  It’s only two to three cups a now, and not after 3pm. Flat whites or Americanos.