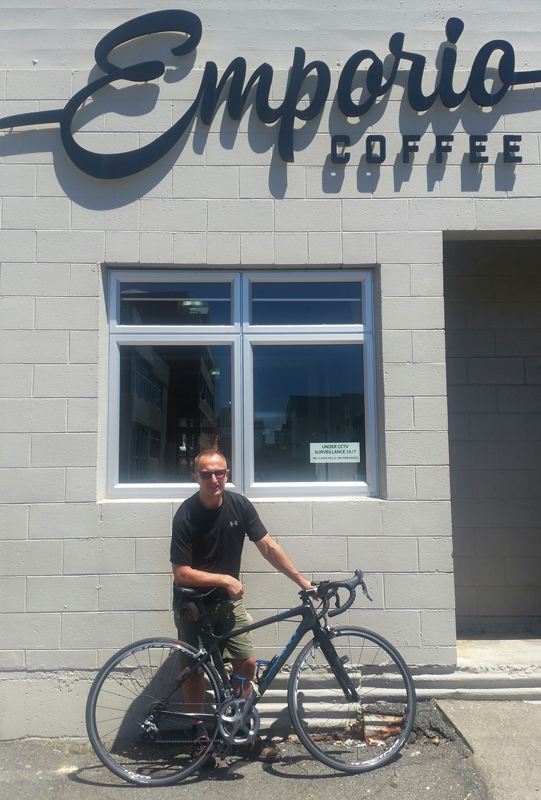 Rod Hill has been with us for just seven weeks but he already feels at home at Emporio.

An avid cyclist, Rod’s energy and enthusiasm means he already seems like part of the family. Very comfortable sharing the deliveries, roasting and packaging with Simon and Eric, he's quickly got to know our regulars' names and coffees. We asked how he came to be with us in Abel Smith St.

There’s a barbershop connection to how we found you
That’s right. I was introduced to Eric (Emporio owner) by my barber who also cuts his hair! It immediately felt right at Emporio, I like that it’s a small, boutique, family affair, and that it’s hands-on. I love being in Wellington, it’s great to live in a harbour city, and the people are really nice. Too many cafes though.

Was your move north from Christchurch to do with the earthquakes Rod?
Not really, but the earthquakes obviously had a lasting impact on everyone in Christchurch. Now that my daughter’s left home, I was really looking for a change. I moved to Wellington 18 months ago, but I’d already been spending lots of time up here due to my connections with Harbour City Racing, the cycling club I belong to.

You worked for C4 Coffee in Christchurch
I was a roaster there for eight years. During that time, we went from a small team to quite a large operation.

We lost our building in the first Christchurch earthquake so moved over the road to a rented space. That building was then red-stickered in the February quake. Vivace Coffee took us in, it was very collegial and we were very fortunate. We operated out of their training room for three months until the red zone cordon was sufficiently reduced that we could move back to our own place. We’d lost a third of our clientele though.

And before C4 you were a café-owner yourself?
I owned a café for six years, it was 60kms out of Christchurch in Little River. C4 supplied the coffee. Before that I was a brick-layer but I always loved cooking so when a friend saw a job for a cook advertised at another Little River café, I applied and got it. When I saw my place for sale down the road, I bought it. I named it Roderick’s Bakery and Café, after myself!

You’re first to arrive at Emporio each morning at 7am, what do you do to start the day?
First up, I switch everything on and open the bar and café. There’s often a keen bean customer waiting for me, like Barry who the other day helped me out carrying some boxes while I made him a coffee! From about 7.10am, all the other regulars start coming in.

What’s the key to a good coffee?
It’s all about the barista, they have to be passionate and they need to understand the grind. Getting the basics right is really important, like cleaning the machine properly — it all makes a difference.

And you must have a great supplier:  the beans can’t be too fresh, or too old. It’s got to be the right blend of everything — all the processes in place.

Tell us about your cycling, 250km a week sounds kind of serious, no wonder you don’t own a car
I took up road cycling over 30 years ago, and my 77-year-old Dad is still into it.  When I was in Christchurch, I used to come up to Wellington to visit cycling friends, and I joined the Harbour City Racing Club. There’s about 30 of us in the club. Now I’m working full-time I only ride once or twice a week. I usually do a 100km ride on a Saturday, around the bays, over to Makara or up the coast.

Earlier this year I took part in a seven-day tour from Cape Reinga to Wellington. Our team won the Open Men’s division. We met the South Island team, who’d come up from Bluff, in Wellington and rode around parliament. I’m off to Adelaide next year to watch the Tour Down Under.