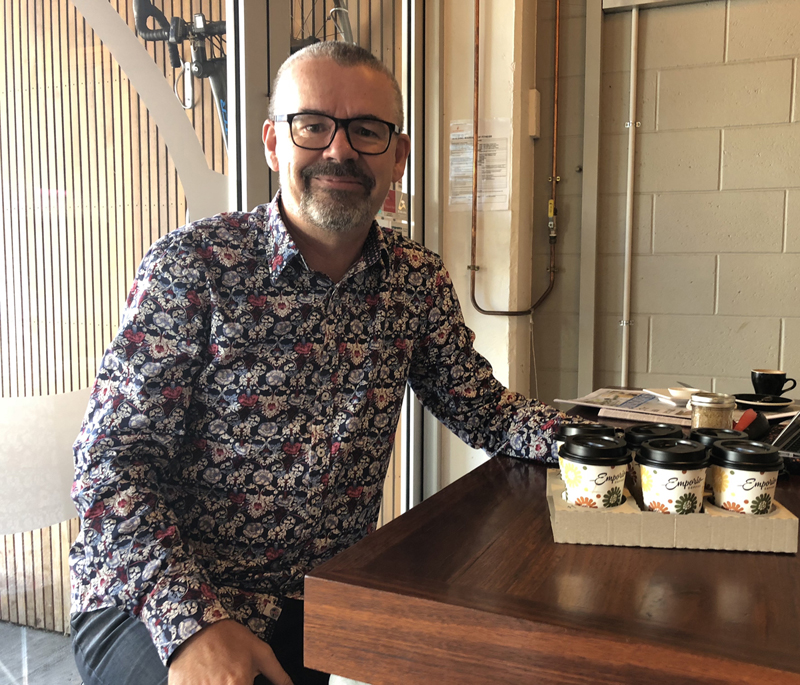 Keeping up with the Coffee Regulars: Jac van Leeuwen

Espresso bar regular Jac van Leeuwen feels an affinity with Emporio owner, Eric Heycoop. The Mediaworks Senior Account Manager chuckles as he explains maybe it’s because they’re both Dutch. Sales and trade are at the heart of both their business dealings, and their friendship!

Jac’s known Eric for almost the whole ten years that Emporio has been in Abel Smith; the roastery backs onto Walter St where Mediaworks has its Wellington base.  Emporio provides coffee for ‘workplace shouts’ and other giveaways hosted by Mediaworks stations, The Breeze, More FM, The Edge and The Rock, and Pavement (Emporio’s coffee box in Tory St) is linked with George FM.

Eric also supplies the company with beans for their plungers and machines and through Eric, The Rock now sponsors the Port Road Drags, an event close to his heart.

Jac’s involvement with radio began when he was just 15, at 1XX in Whakatane. He’s been with Mediaworks for 26 years,  with most of career on air. More FM, the station set up by Doug Gold in 1991, was where it really all started for Jac. The station was then bought by Canwest, whose media platforms eventually became Mediaworks. Jac went off air and moved into sales 12 years ago in 2006, “I love the variety of people I get to meet”.

Jac is usually in at Emporio around 8:45am picking up a flat white for himself and takeout coffees for his work mates. He says he loves the vibe at Emporio, “The place is just exceptional. I like the semi-industrial look and that it’s simple and clean”.  Jac also mentions the retro movies that play on the wall as a favourite.

“The Emporio baristas are fast and consistently good,” he says, “You can tell Eric works hard to train them and ensure the coffees are always the same—nice and creamy and smooth to drink, not bitter. Good baristas have pride and want to make a good coffee”. He also respects that Eric is still at the heart of his own business, “When Eric is roasting, that amazing smell follows me out the door of the roastery and all the way back to work”.