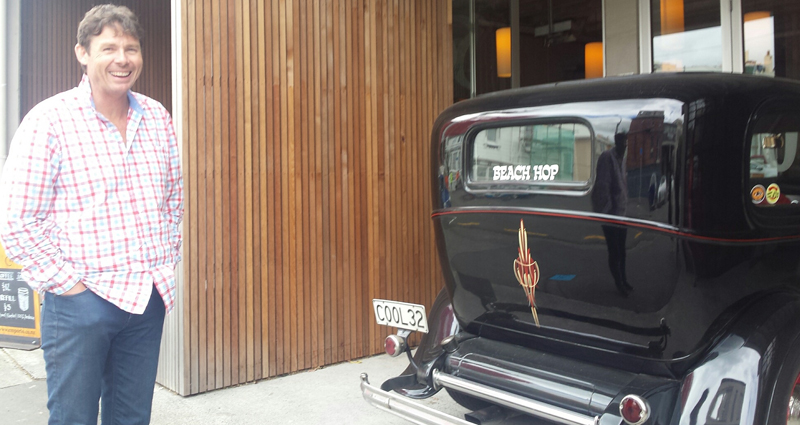 It was no surprise to discover Eric Heycoop, Emporio co-owner, is a Lower Hutt boy. His pride and joy, a left-hand drive 1932 Ford Tudor hot rod is often parked in front of Emporio HQ, greeting regulars—from high-viz workmen to the high-grade creatives from Toi Poneke Arts Centre over the road.

Eric has always loved making things. Trained as a chef, he has been ‘tinkering’ with food and cars since his early 20s. His did up his first car, a 1967 MG, in his Lower Hutt garage in between restaurant shifts. And so began over 30 years of racing, at the likes of Manfield and Meremere speedways, and the now defunct Wellington Street Race, the Wellington 500. During that time, he has bought, modified and sold dozens of other cars, but the MG lives on, stored in a rented Wellington garage. Eric only stopped racing it four years ago when his son Ollie’s passion for the track superseded his own.

So what is a hot rod? It’s as simple as a car that has been modified to enhance performance. Eric says the culture evolved around the time American servicemen were returning from World War II and looking for cheap racing thrills. Cars from the 1920-40s were repowered with later model engines and gear boxes. Think American TV shows like Happy Days. For Eric and many others, the holy grail is the race events at Bonneville Salt Flats in Utah, familiar to New Zealanders thanks to Burt Munro and his 1967 world land speed record on a 47-year-old Indian motorbike; Burt was 68. Eric has visited Bonneville once to watch a friend race an Indian but reckons he and a few of ‘the old boys’ will make it back one day to race a traditional hot rod. Eric’s Ford was bought online from San Francisco. He modified the car, lowering it, adding red ‘tuck and roll upholstery’ and a killer paint job. The term ‘Hop Up’ is clearly visible, an international movement of the Hot Rod community who like 1930s and 40s cars that are driven and enjoyed, (not just modified for show). Eric thinks Henry Ford made the best looking car ever but that he has improved on it, adding late model mechanicals so it can still be driven today, over 80 years later.

Prior to establishing Emporio Coffee in 2000, Eric and Miriam Heycoop owned Arabica Café in Grey St. During this time, missing the hands-on nature and creativity of cooking, Eric decided to roast his own coffee. Roasting, he says, relies on the senses; a combination of instinct and experience. Like other makers, you have to first be passionate about the raw material you are working with. At Emporio, the roasting process is still by hand (not automated). The future for Eric and Emporio: no plans to sell the Ford, big plans to keep roasting coffee and being hands-on in all aspects of his business, from customising espresso machines to personally delivering coffee to his café and corporate clients. Also watch out for collaborations with like-minded Wellington makers who are also turning something simple into something desirable. And perhaps aged 68 he may set a new world record at Bonneville?