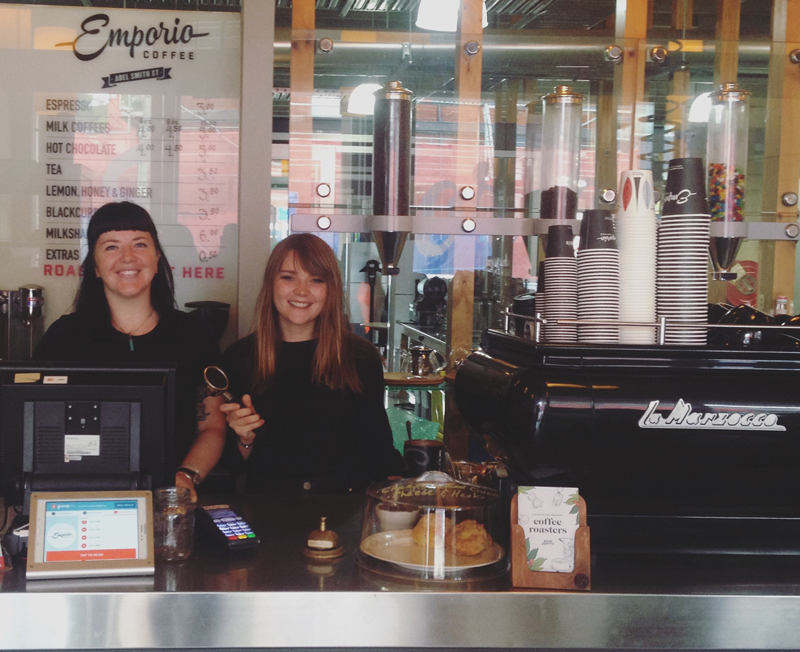 Espress Yourself — Artists at the Helm

Fern, who works with us two days a week, is in her second year of a visual communications degree at Massey and has a passion for illustration. Katie is Emporio’s new full-time barista and trainer, taking over from Liz. She has trained as a photographer but also enjoys illustration and contemporary embroidery.

Like their art practices, Fern and Katie believe strongly that individualism and creativity play a big part in producing a great coffee. Katie says, “I focus on the individual cup; the same amount of effort goes into each coffee. I treat every coffee as a separate project”.

Fern’s artistic eye lends itself to making shots and watching the extraction.  She also savours the way coffee looks and smells.  While Fern loves drinking coffee, and loose-leaf teas, it was wine that took her fancy before returning to study graphic design this year. She recently spent two years working in the Nelson region (Fern moved to New Zealand from Scotland when she was 12 and her family soon settled in Nelson), initially at Neudorf Vineyards. Fern says she lived in a former hop kiln, beginning work at 6am to pick the 2015 harvest and learning all she could from viticulturalist, Richard Flatman. The goal was to eventually study to become a sommelier.

Also during her gap year or two from university, Fern worked at Sublime Coffee in Nelson, this time living in a former motel. Fern says she finds Emporio’s coffee to be a lighter roast than at her previous role. She also loves the physical environment and design of the space here.

Katie sees her barista role as an extension of her art, “I can see the art in it: in the cup; in the shots; in the milk”. Katie loves the fact that each step of the coffee process is done by hand. “Being a barista is a really manual task,” she says, “Practise makes perfect”.

After several years as a barista in Wellington, her home town of Napier and in Belfast during a recent OE, Katie says she still finds it awesome when someone tells her she’s made a really great coffee, “especially at Emporio where every stage of the process is already given so much attention”.