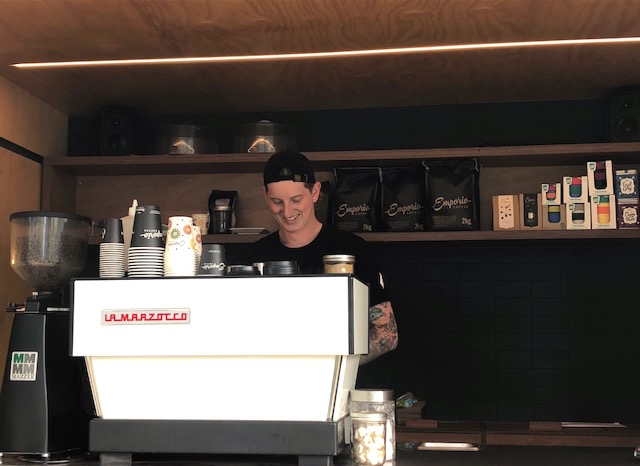 Many people don’t know that Pavement, one of Wellington’s first ‘coffee boxes’, is owned by Emporio. It’s 21-year-old Nathan Milburn who powers Pavement each day, starting work at 6.30am to ensure he’s ready for his first customers at 6:55am.

Tucked into the forecourt of Tory St’s ANZ building, Pavement serves hundreds of coffees a day to local workers, primarily from the ANZ Australian and New Zealand call centre. Nathan reckons about 80% of the coffees he makes each day are for regulars with the other 20% being foot traffic and tourists from neighbouring hotels and backpackers. Nathan is assisted during Pavement’s busy hours by barista Jack Gosling.

Nathan feels pretty lucky to have the autonomy he does at such a young age, and credits Emporio’s Eric Heycoop and Simon Maguire for being ‘such great bosses’. Surprisingly, the young barista is not a huge coffee drinker, describing himself more as a ‘coffee appreciater’.

Nathan did his barista training with Coffee Supreme while working for Pandoro Panneteria but first started making coffee in Wanaka when he was just 16.  He feels the key to a great coffee is the barista’s confidence in their own ability – and taking the time to do everything properly. Nathan says every barista is still always learning and still needs to practice. When he felt himself getting a bit rusty over the summer break, Nathan made sure to put in the time to get his ‘rhythm back’.

Growing up in Wanaka, Marlborough and Nelson, Nathan came to Wellington three years ago but still thinks of himself as a small-town boy who will probably one day return to the mainland. He might even train to be a primary school teacher. A keen amateur photographer and videographer, Nathan also enjoys a bit of gaming and football when he can.

Most popular coffee for the Tory St crew? It’s not the famous latte, though Nathan still makes plenty of those each day, but the mocha! Nathan says he can hardly keep with the chocolate sauce he puts together first thing every morning using Emporio’s own Belgian-style drinking chocolate.