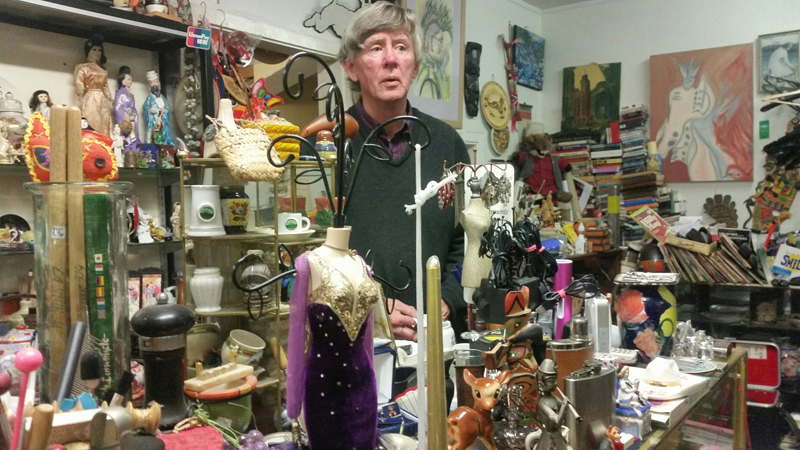 Buy, Sell, Trade or Swap: A Conversation with our Neighbour, David White

I challenge anyone to step into David N. White Gallery, our neighbour at 88 Abel Smith St, and not feel a flurry of excitement. Every wall, shelf and cranny is bursting with colourful collections just waiting to be discovered and taken home. Amid a scene of florals and patterns, even a jar of knitting needles calls to me.

But then owner David White has experience in creating a buzz around his wares. Something of a legend in Wellington, David N. White Gallery has been in business for 25 years, seventeen in its current location. For fourteen years prior, David was co-founder and owner of the notorious Narnia, an emporium of cosmic treasures of the like never before seen in 1970s and 80s Wellington.

Narnia was a splash of hippy happiness in the otherwise grey streets of Wellington and a huge success. Formed with business partner Dave McLatchie, who changed his name to Prince Rupert Kurghan, Narnia sold not just fabulous floaty clothing but fabrics, hand-knotted carpets, incense, smoking paraphernalia (apparently Labour MP John Kirk campaigned against Narnia's 'outrageous' imports) and jewellery. David, Rupert and third partner Zeke Alley took turns with the constant buying trips to Indonesia, Pakistan, Afghanistan, Nepal, Iran, Thailand and even Romania. The original Narnia was at 154 Willis St before moving to Manners St and then Cuba Mall addresses. Narnia was fourteen flamboyant years in business before falling at the hands of a supposedly ‘white knight’ new business partner.

David seems philosophical about Narnia’s demise and says he’d already had his own gallery running on the side anyway. David N. White Gallery was originally established as a dealer gallery, hence the name, but David says he soon got tired of his target market, ‘and some of the artists were a bit picky too’ so decided instead to fill the space with ‘stuff with a little bit of taste’.

David says 98% his stock comes through the door; he’s never advertised. He doesn’t go to auctions and seldom trawls fairs or garage sales. The motto is: buy, sell, trade or swap. Sometimes things need a clean-out though and last year he culled 6.5 tonnes of stock! I'm curious then about the state of his own home and David admits, 'There's a fair amount of stuff in my house'.  He's got a few of his own collections, namely robots and Victorian and Art Nouveau tiles.

With the support of his family, particularly daughter Josephine, David’s still on the shop floor six days a week and he clearly loves it, “I get to chat to unbelievable people every day”.