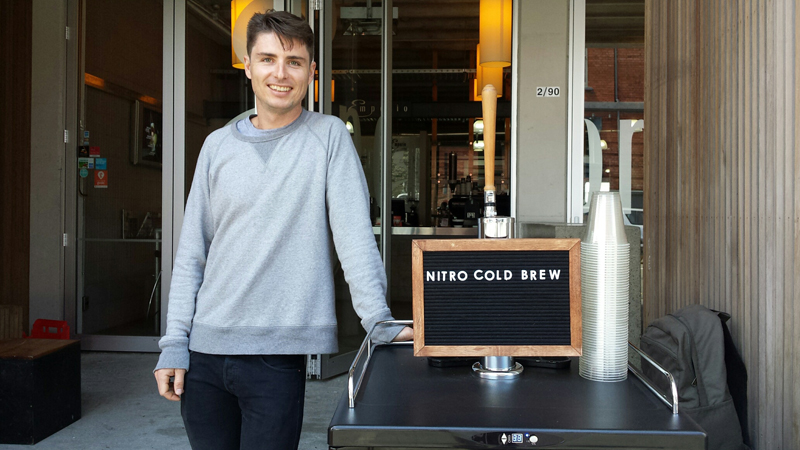 Coffee from a tap like Guinness? It’s the next big thing. This week, we’ve had the pleasure of hosting Crocky (aka Dave Hargreaves) who’s been serving up Crocky’s Cold Brew, created from Emporio coffee beans. Recently returned from New York, Crocky tells us why cold brew is a sensation in the States and why he’s bringing it to us this summer.

RH: A mainlander with an Industrial Design degree, how did you land in the Capital creating cold brew?

Crocky: Following my degree at Victoria, I successfully applied for a post-grad working visa to the States. I had an amazing year in NYC working for New Zealand-owned espresso bar Happy Bones. It was there that I discovered cold brew and saw what a following it had. I returned to New Zealand and started selling cold brew at the Remarkables Farmers Market in Queenstown, where I’m from.

Crocky: I was lucky to be able to return to New York last year to do some more research. Adding nitrogen to create Nitro Cold Brew is an exciting step up from regular cold brew. I’m also now working at Garage Project –it’s inspiring to be surrounded by such an  innovative group of people.

RH: Why do we want to drink cold brew?

Crocky: Cold brew is 67% less acidic than hot brewed coffee (it’s also twice the caffeine). It’s wonderfully creamy in the mouth without the need to add cream or sugar. And it’s just brilliant on a hot day.

RH: Where does Emporio come in?

Crocky: I approached Eric (Heycoop) at the City Market to see if we could work together. I’ve known him for a while and have always respected what Emporio does. Eric’s been great in supporting me. I’ve also had an amazing time working with Brandon, Emporio barista, who is roasting the coffee to fit the cold brew profile, extracting the most out of the flavour to create that delicious creamy brew.

RH: Which of our beans are you currently using and why?

RH: Where else will we be seeing Crocky’s Cold Brew?

Crocky: At the City Market this weekend! I’ll also be popping up at a range of events and festivals this summer. I’m interested in refining the current cold brew methods, so watch this space.